Our wine cellars are located on a wine trail called Podluzi. There is many cycling ways around in the surrounding of the area and there is a possibility to borrow a cyclo-touristic map of the Moravian wine trails. 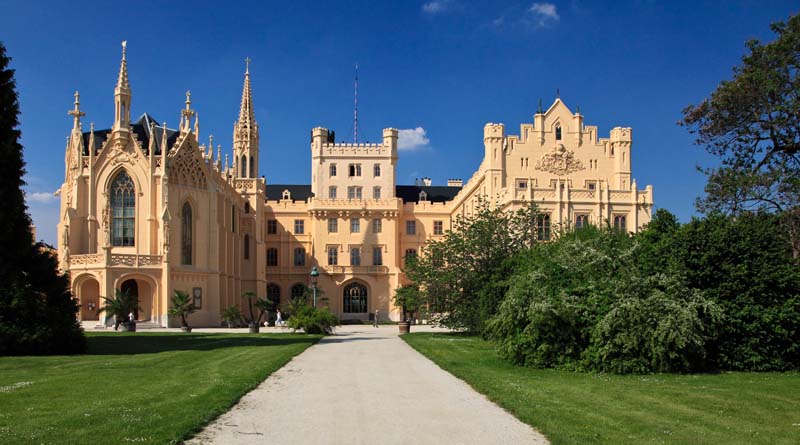 Majestic castles that are surrounded by far-reaching gardens. Flowerbeds that are covered by wide range of flowers. Extensive golden fields changing into green woods. The romantic landscape decorated by lakes, on which surface there are plenty of water lilies. Along the paths, there are many significant buildings. This all and much more was created by the family of Liechtenstein.

The castle Buchlovice, situated close to the castle Buchlov, belongs to the most significant baroque aristocratic residence located in the area of the Czech Republic. The quality architecture, extensive collections, well-known owners and very important place in the last years of the Habsburg monarchy makes the castle more important reaching behind the Czech borders.

More on the websites of Zámek Buchlovice.

The beginnings of the castle date back to the first half of the 13th century. It was established by the Czech king as a strategically situated defensive fortress and an administrative center with jurisdiction.

More on the websites of Hrad Buchlov.

This picturesque baroque castle is situated in the municipality of Milotice, that is located in the in the South-eastern part of the region Moravia, around 60 km far from the city of Brno and 26 km from Nechory, in the area of rich cultural folklore traditions and a delicious wine.

More on the websites of Zámek Milotice.

An exposition situated in different objects is introducing the visitor a way of living in the mountain ranges of Slovacko region, as well as in the fertile area of Pomoraví (surroundings of the river Morava), where a a big part of the economy is based on the vine growing. A demonstration of vineyard buildings and their facilities, which is complemented by the vineyard representing growing of wine from ancient time to how it is right now. It is the only exposition its kind in the Czech territory.

More on the websites of Skanzen.

Palava is located in the north-western tip of the Pannonian lowland, in the warmest and almost the driest area of the Czech Republic. That also creates the opportunity for vine growing and the presence of unique kinds of plants not growing anywhere else. There is one, and best-known, kind of the Czech white wine called just after this area – Pálava.

More on the websites of Palava.

Another interesting tips of where to go you can find available in the Touristic guide.